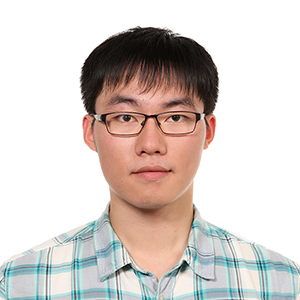 Hi there, I’m a junior student from Shanghai JiaoTong University(SJTU). In my sophomore year, I started to learn about machine learning with a try of using Support Vector Machine (SVM) to classify credit card digits, something like the MNIST TASK. Then I joined ADAPT and began my research work on NLP.

Within the NLP domain, many statistic methods work quite well, giving astonishing results on the basic tasks, chunking (which is especially important in Chinese), Part of Speech tagging (POS) and Named-Entity recognition (NER). Models like Hidden Markov Model (HMM) and Conditional random fields (CRF) can give you a glimpse.

These days, I was attracted by the awesome performance of Deep Learning in NLP, which utilizes Neural Networks Models. I’ll try my best to give an overlook over the Neural Networks stuff. On my own experience, the mathematic things sometimes distract me from the intuitive of how Neural Networks works. Thus, in this blog, there will only be some “baby math”, as Prof. Chris Manning named in CS224n.

Part of this blog overlaps with the great blog from Andrej Karpathy, which definitely worth reading. But I’ll try to give you something more concrete about backpropagation by implement a linear regression model, and illustrate some examples and applications of Neural Networks in NLP, including word embedding and character-level language model.

At the first glance of the Neural Networks architecture, I wonder how it works so brilliantly. It seems non-sense that several layer of mathematic computation can simulate human brain, one of the most complicated creature in the world, even a little.

Let’s turn to how our brain works to get an intuitive idea. 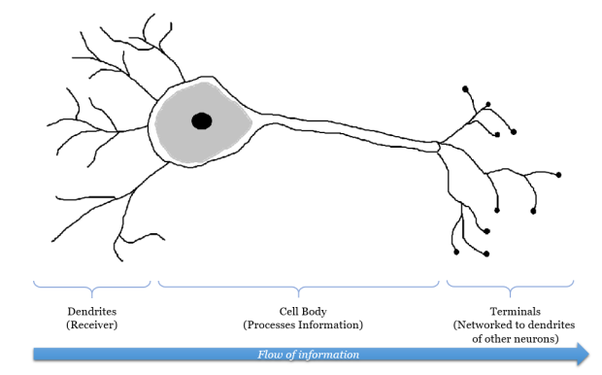 A brain neuron and its main components. Image credit: Quora

Our brain has a large network of interlinked neurons, which act as a highway for information to be transmitted from point A to point B. When different information is sent from A to B, the brain activates different sets of neurons, and so essentially uses a different route to get from A to B.

Credit: Quora answer by Annalyn Ng (Quote part of her answer, click if you are interested, which I recommend you to do.)

Let’s recap what we can learn from last section: 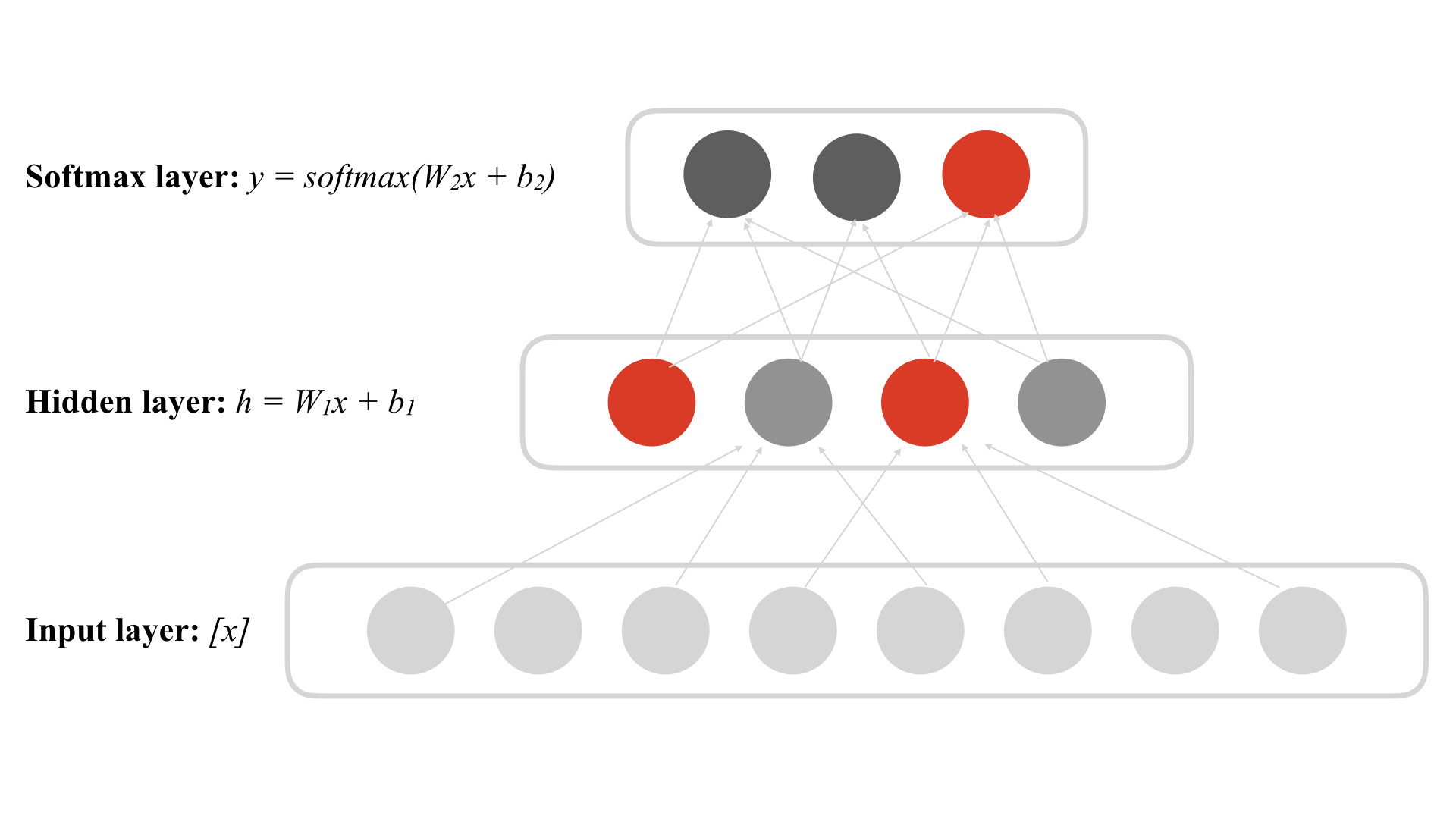 Vanilla Neural Network architecture, with one hidden layer
You can image that if you feed a picture involving animal into the network, it can output a tag of "cat" or "dog".
`W` and `b` are parameters of the model, which can be learned by training.

As you can see in the picture, when facing an input of a cat picture, the first and third (from left) neurons are activated (red), and then, these neurons send signal to the output layer and get a “cat” output.

Thinking about our brain do the same thing when we see a cat, some neurons are triggered and we find out that it is a cat!

This is the intuitive I see from the Neural Networks, though it is a simplified and idealized model just like most of the models in the world, it has the potential to improve machine intelligence.

Till now, I believe that you have obtained an intuitive idea about how Neural Networks works. Then I’ll introduce how data flows from input to out, a feedforward process, and how the weight matrix and bias are trained, a backpropagation process.

The feedforward process is straightforward, you can treat it as a function, feed it and it will give an output.

The backpropagation process is to tune the parameters, e.g. W and b, to fit the training data, minimize the total loss. I’ll take a simple linear regression model as an example, to illustrate how backpropagation works with Stochastic Gradient Descent (SGD).

Consider a network take a scalar x as input, and output y = ax + b. If we train the model on training set:

The model will soon fit the function , with quadratic loss function and SGD.

As you may acknowledge, Chain Rule is the key tool we should utilize. Backpropagation propagates through the chain rule from back to front.

Time to code! A toy implementation with pure Python:

Let’s recap what we have learned:

It is hard for us to encode words so that computer can use and meanwhile, keep the “meaning”. A common way to utilize the “meaning” is to build a synonym set or hypernyms (is-a) relationship set, like WordNet. It’s useful but largely limited, limited to the relation set and the vocabulary set.

If we regard words as atomic symbols, we can use one-hot representation to encode all the words. Such representation also suffers lack of “meaning” and flexibility (influence all words when adding new words), and memory usage (13M words in Google News 1T corpora). The inner production of 2 different word vector is always 0, means nothing.

However, researchers came up with an idea that we can get the meaning of a word by its neighbors.

It reminds me of the years I was new to English. As a non-native speaker, I always look up in a dictionary when meeting a unknown word, but teachers said that “Never look up at first glance! Guess its meaning from the context first!”.

Here’s an example about word and context from CS224n:

The words in the context represent “banking” !

Recent years, with the proposition of Mikolov et al., distributed representation of word can be trained fast and successfully captures word’s semantic meaning.Till now, there are 3 main models to train word vectors:

I’ll introduce the word2vec model, for these 3 models are almost the same. GloVe takes statistic feature into account, and FastText predicts tag instead of words. I won’t go detail to the training tricks, such as negative sampling, hierarchical-softmax, to name just a few.

The key idea of word2vec is:

Predict between every word and its context words.

So obviously there are two algorithms:

It’s time to dive deep into the skip-gram model. The diagram below is a clear representation from CS224n. 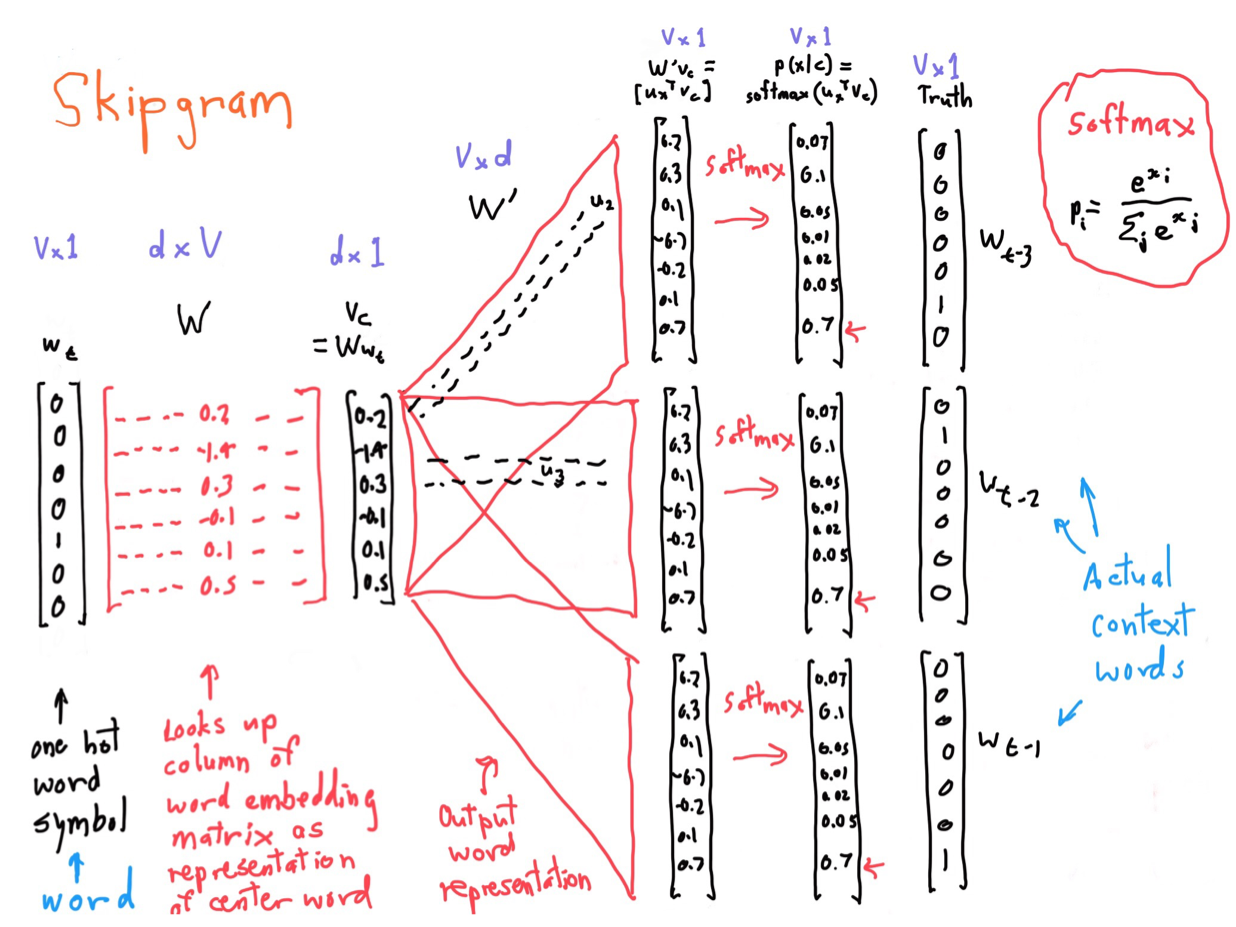 Well, a little more explanation of the diagram. The 3 vectors at the end of the model represents all the context words for one center/target word. It stands for the several context-target pair we generates from the training corpora, doesn’t mean that we predicts several context words on one feedforward.

If you are interested in how to code a word2vec model, here is a toy example with PyTorch.